On the allure of the out-of-town bookstore 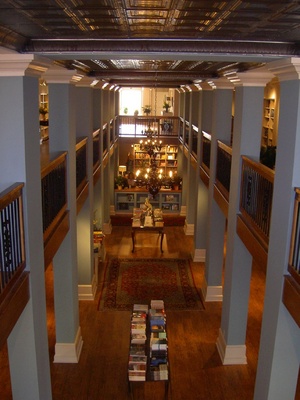 While traveling, I tend to spend a good chunk of my time and money in bookstores. Looking at the books on the display at the indies is one of the best ways to take the pulse of the place. Also, the novels I pack are never the ones I’m in the mood to read, and booksellers tend to be pretty good at suggesting the kind of things I’ll want to do in town.

Although I only took a few books with me when I left town for the Mississippi sojourn recently, I returned with several armsful. If Mary of the fabulous Square Books hadn’t offered to put a big box in the mail, I might’ve had to choose between my new traveling library and all my summer clothes.

I wish I’d been able to spend more time at TurnRow Book Co (photo above). It’s a gorgeous but very comfortable shop that sits on the one cleaned-up street in downtown Greenwood, Mississippi. I got there a half-hour before closing, so my time was limited.

The space is all wood, open space, and chandeliers, and I was equal parts excited and bummed out to see signed copies of Pia Ehrhardt’s Famous Fathers on display. 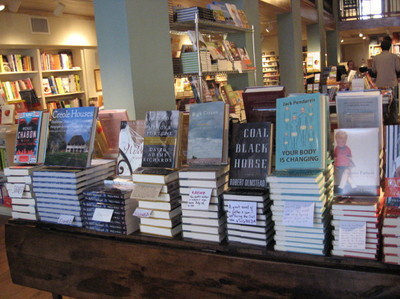 Excited because I’ve been reading Pia for years, since long before we became friends. She was just some Internet writer then — the one most of the rest of us were in awe of. (That was before I gave up on short stories in favor of my novel, and I sent my first webzine submission — to Eyeshot — after discovering her work on the site.)

Bummed because the placard said her reading was scheduled for the week following, when I’d be back in New York. Pia writes sentences like “Bodies after sex don’t lie,” and I’d like to hear her read them.

Most of the literary offerings were upstairs. I decided on a copy of James Baldwin’s If Beale Street Could Talk, which I hadn’t read, and headed for a used book room that I forced myself to vacate after picking out just one book, The Writings of William James (Jessa’s recommendation).

TurnRow may be the only bookstore in the world to feature Malcolm Gladwell’s Blink: The Power of Thinking Without Thinking on a display table alongside The Purpose-Driven Life. 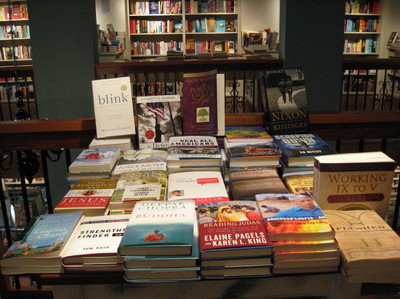 The theory behind the arrangement wasn’t immediately apparent. But while Rick Warren is an incontrovertible hack and feel-good huckster, I can’t say I was offended on Gladwell’s behalf. 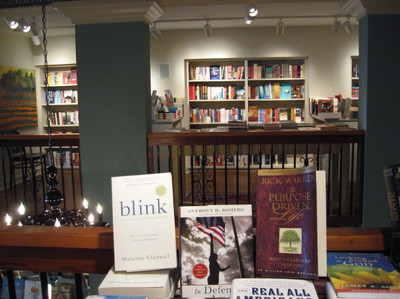 From professional to doughty, lone rebel in 14 short months?