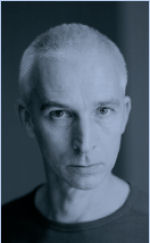 All of a sudden I’m going to be doing a public interview with Rupert Thomson — a literary hero I’ve never burned out on — at McNally Robinson on Friday, August 17, at 7 p.m.

The scheduling dovetails with the U.S. publication of his latest novel, Death of a Murderer. A more stripped-down, contemplative story than I’m used to seeing from Thomson, the book still reflects the author’s preoccupation with obsession and the nightmarish paths it can lead down. Last year he explained:

The new novel is set during a single night in November 2002. A police constable is guarding the dead body of a famous murderer in a hospital mortuary north-east of London. It’s a twelve-hour shift, from seven in the evening until seven the following morning. The body in question is that of Myra Hindley, though her name is never mentioned. Together with her lover, Ian Brady, Myra Hindley was responsible for the deaths of five people in the early 1960s. Three of those murdered were young children. For the British public, she became an icon of evil. She was a woman, and she had killed children. People never forgave her for what she’d done. They never forgave, and they never forgot. Even today, she’s something of a taboo subject.

At the beginning of the policeman’s shift, everything is normal and routine — except, of course, that the situation is, in itself, extraordinary. As the hours go by, though, and prompted by the body he is guarding, he begins to meditate on his own life, and the wrong he has done. The novel has something of St Augustine’s Confessions about it, I hope, in that it shows a man being completely honest with and about himself. It is also a gloss on Myra Hindley’s life, since the policeman is reflecting particularly on obsessive relationships with other people, and how they can lead you into patterns of behaviour you never thought possible.

If you don’t know Thomson’s work, start with The Book of Revelation (better read what it’s about first, though) or Divided Kingdom. Or follow James Hynes’ recommendations, in The Dreamlife of Rupert Thomson.

Nowhere to change into your tuxedo, and other newsroom inconveniences