Help preserve the right to film in NYC’s public spaces 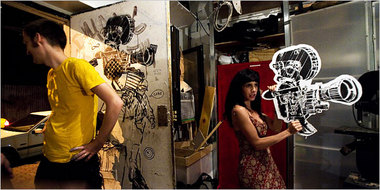 Rules proposed by the Mayor’s Office of Film, Theater and Broadcasting would require any group of two or more people who want to use a camera in a public place for a half hour or more to obtain a city permit and $1 million in liability insurance. The time for public comment ends Friday.

The film office has tried to damp down criticism by claiming it is merely codifying “our current procedures with respect to film permitting.” (“Note that this situation [i.e., filming in one place by two or more people for 30 minutes] is RARE for recreational photographers,” says the site. Oh, really?)

In fact, the phrasing of the rules is vague and terribly broad, offering no exceptions for amateurs, and inviting selective enforcement.

“Your everyday person out there with a camcorder is never going to know about the rules,” Mr. Dunn [assistant legal director of the New York Civil Liberties Union] said. “It completely opens the door to discriminatory enforcement of the permit requirements, and that is of enormous concern to us because the people who are going to get pointed out are the people who have dark skin or who are shooting in certain locations.”

The rules were promulgated as a result of just such a case, Mr. Dunn said.

In May 2005, Rakesh Sharma, an Indian documentary filmmaker, was using a hand-held video camera in Midtown Manhattan when he was detained for several hours and questioned by police.

As part of a settlement reached in April, the film office agreed to establish written rules for issuing permits.

Picture New York has posted an online petition protesting the abridgement of First Amendment rights, and the lack of public notice about the proposals. If you live here, please sign. Or, better yet, file an objection of your own. (Thanks, High Low & In Between.)

For the love of Twain