Evolution and the origins of language 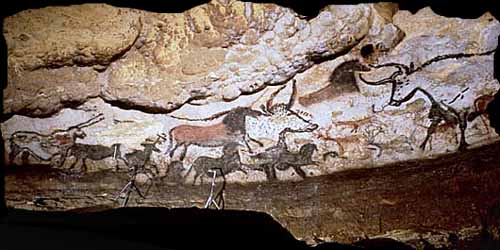 A., my delightful stepdaughter, wanted to see the Museum of Natural History’s Mythic Creatures exhibition while she was in town.

“Sure!” Max and I said. But after assorted errands, plant-waterings, takings of sinus medication, and other tedious delays of the sort only grown-ups can conjure, we arrived at the museum several hours after the exhibition had sold out. No dragons, unicorns, or mermaids for us.

Instead we found our way to the Hall of Human Origins, which opened in February and presents scientists’ current understanding of “the history of human evolution from our earliest ancestors millions of years ago to modern Homo sapiens.”

The permanent exhibition combines the fossil record with up-to-the-minute genetics research. Co-curator Ian Tattersall explained to a Discover reporter in May that DNA research has done more than paleoanthropology to illuminate “the actual geometry of relationships between us and whatever our closest great ape relative is.”

The exhibits unfold chronologically — the better to mirror the nonlinear progress of actual human evolution — but while the skeletons and species dioramas and DNA tubes were interesting, the organization was not immediately clear to any of us.

It didn’t help that the audio was too low on some of the videos — a common failing of the hi-tech museum. (At least most of the interactive displays aren’t broken yet. Last time we went to Rose Center for Earth & Space, a quarter of the touch screens were unresponsive.)

I was most drawn to the exhibits on the cultural aspects of evolution, particularly the origins of language, art, and music.

The videos on animal communication are surprisingly compelling in this context.

I knew that chimps endlessly scheme to get a bite of each other’s bananas, and that whales sing songs with complex patterns and phrases, but I didn’t realize how far the Great Ape Trust’s research has progressed into the capacity of bonobos to comprehend and use sign language and lexigrams based on human language.

Primitive tools and art are also on display. There’s a replica of a giant hunk of ochre carved with geometric patterns some 75,000 years ago.

But my favorite exhibit is an exact, wall-sized reproduction of Lascaux cave art dating to 15,000 B.C. — the last Ice Age.

The cave was closed to visitors in the ’50s, after carbon dioxide from their breath caused the paintings to deteriorate, but the French government created exact copies of two galleries for the public to tour.

I’ve only visited online. And while I definitely recommend a virtual tour of the various halls, chambers, and passages, it’s hard to conceptualize the scale of the thing when you’re sitting at your computer.