Happy weekend from the absent father 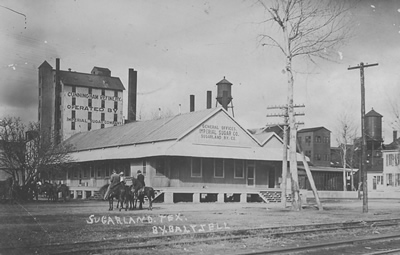 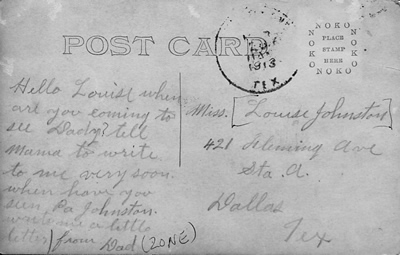 Zone Johnston, my granny’s father, was always dragging his wife and kids to carpentry jobs throughout Texas, Louisiana, Missouri, and beyond, and then abandoning them in favor of a new pretty face. According to my mom, “[his wife’s] people would have to come to where they were and take them home until Zone finished his work and wandered back to find them.”

Maybe Zone mailed this postcard (above) from the scenic Imperial Sugar Co. offices to his younger daughter, Louise, while he was away gallivanting. The message reads:

Hello Louise when are you coming to see Dady? tell Mama to write to me very soon. when have you seen Pa Johnston. write me a little letter/from Dad

If it was sent in 1913 — and I think it was, but someone has enhanced the date by hand — Louise would have been five or six years old. Less than three decades later she died in the state mental hospital.

Gratuitous 1913 trivia: The world’s first crossword puzzle was published in The New York World in December of that year.

Revolution to republic in prints and drawings