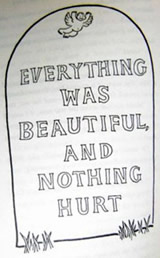 No doubt you’ve heard. The great Kurt Vonnegut is dead. 84 years old, brain injuries from a fall, and he’s gone.

Perhaps, as he insists repeatedly in Timequake, things will be better when he’s dead; perhaps his followers will stop searching his books for some clue as to how their guru lives, and simply read them. But he seems to doubt it.

From my seat of despair, I bring you only the Times’ featured author page, Vonnegut reading from Slaughterhouse Five, more audio, and these selections from my own archives:

Okay (posted later), here’s more: On BBC Radio 4 today, Alasdair Gray says Slaughterhouse Five, like Heller’s Catch-22, forced the Americans and British to face the Dresden massacre by presenting events as “a form of fantasy that embedded the reality.” Elsewhere, TEV points to an excerpt from Mother Night and James P. Othmer recalls riding in a limousine with Kurt Vonnegut as as a hurricane was bearing down on New York City.