Kumar on post-colonial writing in a globalized world 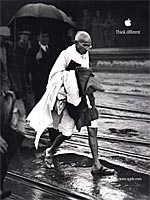 Amitava Kumar sends word that he’ll be reading from Bombay-London-New York for his “Post-Colonial Writing in a Globalized World” talk with Ilija Trojanow at the Goethe-Institut tonight.

The section he has in mind, which I read while preparing for the Branding & Freedom in the Market Economy event last month, considers representations of Ghandi. I’m posting it in context here for those who can’t make it.

Once, when I came out of the subway in New York City, I saw a sign that said “Gandhi was a great and charitable man.” Beneath, in smaller type, were the words, “However, he could have used some work on his triceps.”

The sign was an advertisement for the Equinox Fitness Club. If you joined early, the sign said, you could save 150 dollars.

I confess I like the use to which Gandhi is put by the Equinox Fitness Club. No doubt the Mahatma would have found the price of the packet a bit steep. But I think he would have liked the thriftiness of the early-membership plan. Gandhi came from a family of traders. The name his family gave him Ã¢â‚¬â€œ Mohandas Karamchand Gandhi Ã¢â‚¬â€œ was translated by the writer G.V. Desani as “Action-Slave-Fascination-Moon Grocer.” What a tantalizing mix of qualities! The qualities of a man of the world! This kind of man would even have understood advertising.

I am sure the Mahatma would have had a witty quip for the use to which Microsoft has put his bald visage. In America, Gandhi’s image appears on huge hoardings with the words “Think Different.Ã¢â‚¬Â There is a tiny logo in the corner showing a rainbow-striped apple. Salman Rushdie has commented on this phenomenon: “Once a half-century ago, this bony man shaped a nationÃ¢â‚¬â„¢s struggle for freedom. But that, as they say, is history. Now Gandhi is modeling for Apple.”

In India, Gandhi had been a face smiling at me from the walls of the decrepit offices in the small towns of Bihar. The use of his image for a New York City gym has returned me to a different use of Gandhi, one that takes the Mahatma out of the museum. This use has not been unknown in India, it has just been ignored by official pieties. This is the irreverent Gandhi of the Indian marketplace. Long live Gandhi Safety-Match. Long live Bapu Mark Jute Bag. Long live Mahatma Brand Mustard Oil.

Do I really want to see Gandhi selling deodorants to a guy in Dadar?

“Cleanliness is next to godliness. Free your body of foreign odors!”

Perhaps not. But the point that I am moving toward is that a more robust, and perhaps muscular, Gandhi is visible in the pages of Indian writing in English these days. The sanitized Mahatma of early Indian fiction has given way to a maverick Gandhi.

Let’s take as an early example the memoirs of a writer like Nayantara Sahgal, who was also Prime Minister Nehru’s niece. Sahgal described her return from New York to New Delhi in Prison and Chocolate Cake. India had only recently won freedom; it had not recovered from the trauma of the bloody Partition. Then, Gandhi was assassinated. In Sahgal’s book, we saw Gandhi through a young woman’s eyes that are full of adulation: “My own reaction was mingled with reverence. Could it be true that a man could talk of love and truth and goodness, and apply these religious terms to politics and not be laughed at? Could it be true that such sentiments could actually guide a nation’s policy? Yet in India all these things were true.”

A few decades into the realities of independent India, and the scene appears irredeemably altered. In Upamanyu Chatterjee’s English, August, what we are left with is the post-apocalyptic image of the Gandhi Hall that looks like “something out of a TV news clip on Beirut.” Outside this building with its broken windowpanes and bombed-out appearance is the “statue of a short fat bespectacled man with a rod coming out of his arse.” This is the postcolonial Gandhi. And I like him because — I don’t know how to say this without irony — nothing seems foreign to his body.

Which is to say, my worry about his being used to sell deodorants is really an irrelevant question. Gandhi can take in anything and still keep smiling. A satyagrahi always stays on top of the world. This is also nonviolence taken to its real and proper extreme. In a country sodomized by its leaders, here is a leader who has chosen to stand among the people with a rod up his arse.

In the early 1980s, I was in college in Delhi. Each morning, I rode on a bus that took me past the memorials to national leaders, including Gandhi’s. During those years in college, I came across Kanthapura on my required reading list in an English course. Raja Rao’s Kanthapura, a novel about the Gandhian revolution, was first published in 1938, almost a decade before the independence. The novel was about the inhabitants of a village, innocent of any history, suddenly swept by the powerful tide of Gandhi-worship. Rao, along with R.K. Narayan and Mulk Raj Anand, formed the triumvirate of Indian writers in its early stages.

While our teacher discussed the book with us, in the world outside our classroom, another myth of Gandhi was being born. The British film-director Richard Attenborough was shooting his movie on Gandhi in Delhi. The newspapers printed updates of the film-shoot. There were complaints about Gandhi being played by an actor who wasn’t an Indian; then came the giddy news that Ben Kingsley was at least half-Indian. One of my fellow students, a stocky man who studied history and rode a motorcycle, had a small role in the film. One day someone came to class with the news that there were buses waiting outside the college gates. We could all go and join the scene of Gandhi’s funeral that was being shot that day. Attenborough needed a huge crowd of well-behaved extras.

Hollywood was going to bring our freedom struggle alive for us. In Kanthapura, Rao’s highly mannered syntax had conveyed to me the removed grandeur of idealism. I was discovering the past in a stylized way. Then, in the world outside the classroom, Hollywood brought peace and popcorn together, and gave Gandhi the honor he deserved. An Oscar.

It would be impossible for someone like me, born some decades after independence, to imagine Sahgal’s or Rao’s awestruck relationship with the Mahatma. Our freedom as a later generation of Indians has also meant a freedom from Gandhi-worship. Newer Indian writers have undoubtedly played a small part in this whole process of demystification. Consider Vikram Chandra’s portrait of Gandhi where he appears less a holy man on a pedestal and more a tactical mix of East and West, of high and low, of the sacred and also the secular: “Be fearless, like that suave cosmopolitan M.K. Gandhi, that most international of khiladis, who told us repeatedly that while his political gurus were Gokhale and Ranade and Tilak, his spiritual gurus were Tolstoy and Thoreau and Ruskin, and that he got his nonviolence not from the Gita, but from the Sermon on the Mount. Remember that Gandhi’s audience was not just Indian, but also everyone else; that all his actions, the spectacle of his revolution and the revolution of his self, were performed simultaneously before a local audience and a global one. He spoke to us, to those he loved, but in speaking to us he was also speaking to all the world, and in speaking to the world he wanted nothing less than to change all of it.”

Chandra’s Gandhi is a happy borrower. He is not unlike the Bombay criminals in this respect. Chandra describes them as “those CCTV-using, Glock-firing, Bholenath-worshipping gangsters.” Chandra finds them appealing because they “do whatever it takes to get the job done.” From
Gandhi to the Glock-firing gangsters… in less than 60 seconds! This is not only taking Gandhi off the pedestal — it is more like pushing him into the ring, with red boxing-gloves and a rakish grin.

The historian Partha Chatterjee has written: “The ‘message of the Mahatma’ meant different things to different people.” According to Chatterjee, what Gandhi’s words “meant to peasants or tribals was completely different from the way it was interpreted by the literati.” Following Chatterjee, it is quite interesting to me how what newspaper-editors call “ordinary Indians” also in their own unremarkable ways have made Gandhi their own. I think that the Gandhi of the Indian marketplace that I was earlier championing is an example of that easy accommodation.

The people, in fact, might be ahead of writers and editorialists. As the research of Shahid Amin reveals, peasants in Gorakhpur, in the eastern India of 1921, were producing a “many-sided response to Gandhi.” In the spring of 1921, The Pioneer carried an editorial about a report in a Gorakhpur newspaper that had cited reports of miracles popularly attributed to the Mahatma. “Smoke was seen coming from wells and, when water was drunk, it had the fragrance of keora (pandanus odaratissimus) an aloe-like plant which is used in the manufacture of perfume; a copy of the Holy Quran was found in a room which had not been opened for a year; an Ahir who refused alms to a Sadhu begging in Mahatma Gandhi’s name, had his gur and two buffaloes destroyed by fire, and a skeptical Brahmin, who defied Mr Gandhi’s authority, went mad and was only cured three days afterwards by the invocation of the saintly name!”

In this list of magic and change, I see a lesson about our buried, peripheral modernities. The lesson becomes clear to me long after I come out of the subway and see Gandhi’s name on a sign advertising a gym. But the lesson, slow in coming, is clear enough. It is about people mixing the rational with the ritual, science with séance, and politics with thepoetry of magical transformation. Long before Richard Attenborough, the mythmaker, long before the admen from Madison Avenue, long before our politicians had invented the Gandhi Jayanti Samaroh, long before Indian writers had found magical realism… were the peasants of Gorakhpur giving life to Gandhi. Long live the peasants of Gorakhpur.