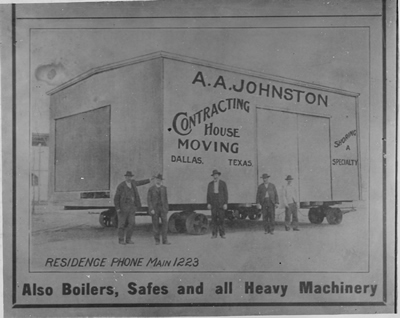 My great-great-grandfather, Allen Alexander Johnston*, was born in Kentucky in 1854. He moved to Dallas before the turn of the century and founded A.A. Johnston Contracting & House Moving sometime prior to his death in 1916.

Many early house-moving platforms of the kind depicted in his ad were pulled by teams of horses. How Johnston powered his rig I don’t know. In the 1900 census he was listed as a carpenter. My great-granddad, Zone, reputed in family lore to have identified as a communist, followed in his footsteps.

For the best in home relocation (and construction) folly, watch Buster Keaton’s One Week.

* Pictured here, far left, next to his wife, the not-so-grandmotherly “Mammy”

When the work’s not going well