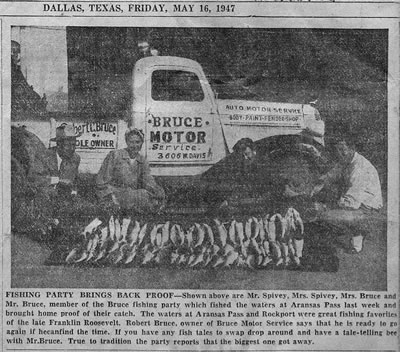 Six years after my mom’s dad helped start a garment cutters’ union, he’d left the clothing trade, been divorced from my grandmother and remarried, and founded Bruce Motor Service.

This photo appeared in the May 16, 1947 issue of Shopping News, a weekly Oak Cliff circular masquerading as a newspaper. The caption paints Robert Bruce as a man who liked a story.

Fishing Party Brings Back Proof — Shown above are Mr. Spivey, Mrs. Spivey, Mrs. Bruce and Mr. Bruce, members of the Bruce fishing party which fished the waters at Aransas Pass last week and brought home proof of their catch. The waters at Aransas Pass and Rockport were great fishing favorites of the late Franklin Roosevelt. Robert Bruce, owner of Bruce Motor Service, says that he is ready to go again if he can find the time. If you have any fish tales to swap drop around and have a tale-telling bee with Mr. Bruce. True to tradition the party reports that the biggest one got away.

Bruce’s own shop only lasted until the next vocation shift, but, 60 years later, there’s still an auto repair establishment at 3606 W. Davis.

Gratuitous literary trivia: Jack Kerouac started the cross-country wanderings that formed the basis for On the Road in 1947. Here’s a map reportedly taken from Kerouac’s own diaries.