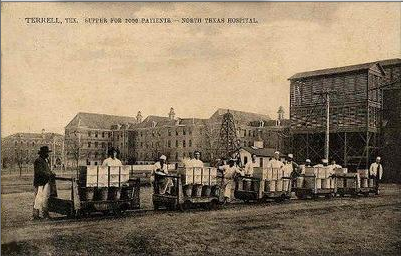 I spent last weekend getting sucked into Ancestry.com, in search of information about ancestors like my mom’s dad, whom she claims was married thirteen times, and his hay-hook-wielding father and infant-murderess mother.* You’d think the census takers would’ve been moved to jot a few observations about these people in the margin, but no.

I did find out where my grandmother’s only sister was locked up, though. “Supper for 2000 Patients” is a postcard picturing the place, the Terrell State Hospital, formerly known as the North Texas Lunatic Asylum. Here’s a journalist’s report on what it was like to spend the night there in 1896.

All but one of the ancestors I’ve traced back beyond my great-grandparents are monotonously English or Scottish, and Protestant. The Mayflower, colonial Virginia, the whole thing. One of my Puritan forebears sported the carefree name of “Fear Brewster.” So far my closest brush with ethnic diversity is the Frenchman who impregnanted an ancestor and ran off.

But I did find out that I’m (maybe possibly) related to my beloved Mark Twain two different ways, through each of my parents.

* Amended to add: I had the wrong great-grandmother in mind here. This one was “a Pentecostal holy-roller,” I am informed. It was my mother’s mother’s father’s mother who was reputed to be the baby killer.

The habit of pretending to believe