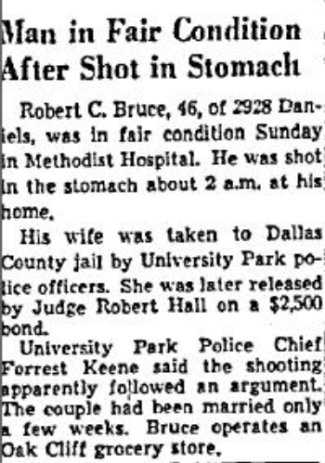 My mother didn’t know most of the many women her dad married, but in email last year casually referred to a shooting. Of her father. By one of the wives.

Next (I think) he married a woman named Evelyn, and, believe it or not, they lived on Daniels Avenue on SMU campus right down the street from my sorority house where I lived for 3 years while in college. She may be the one he was married to when he was shot in the gut and nearly died. I think she shot him but don’t know for sure. Daddy led quite a life: women — perferably ones with money, which he took and made tons more with. However, he was an alcoholic “rounder-hellraiser.” All the money the ladies had he used to fund various business ventures. At one time he was the best auto mechanic with a full-repair location in Dallas. Then he was a true master grocer of privately owned grocery stores. Granny met him when she worked for Justin McCarty (one of the top clothing designers/mfrs in the country — even up till the 70’s). He was their most outstanding designer and pattern drafter. He had other talents but those are the ones I remember. Mr. McCarty would say of my dad that he was a real genius of the business and would go far if he would leave the bottle alone.

It occurred to me the other day that newspapers love a domestic meltdown, so I went fishing in the Dallas Morning News archives. Sure enough, I found a brief item (above) dated July 24, 1950.

According to the story: Robert Bruce, 46, was indeed shot by his wife. The shooting “apparently followed an argument” (you don’t say), and the couple “had been married only a few weeks.” Bail was set at $2500. ($21,959.85 today, according to the inflation calculator.)

It’s hard to track down Dallas Times-Herald archives — the paper ceased publication in 1992 and consequently hasn’t been digitized — but with the help of the Dallas Public Library I intend to check those, too.