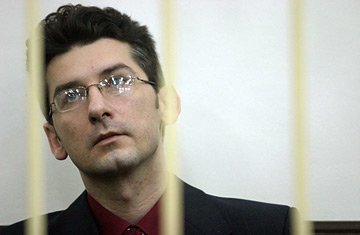 No doubt David Grann’s utterly riveting Letter From Poland was the talk of the blogosphere when it appeared last month, but I only just rescued that issue of The New Yorker from the box of mail I packed up to move, and I spent an hour I couldn’t spare on this story about a brutal murder perpetrated in November 2000, in the southwest corner of Poland.

The case of Dariusz Janiszewski, a businessman whose brutalized corpse washed up in a river, had gone several years’ worth of cold before a new detective reopened the file. He discovered that the victim’s cell phone, missing since his disappearance, was sold on an Internet auction site even before his body was found. Stranger still, while the file had been gathering frost, the seller, “Chris,” A/K/A former philosophy student Krystian Bala (above), had published a novel, Amok, “which encapsulated all his philosophical obsessions.”