I’m in Oxford, England (as a guest of Oxford University Press, which has provided travel and lodgings) for the 80th anniversary celebration of the Oxford English Dictionary.

Previous posts about the trip are here and here. 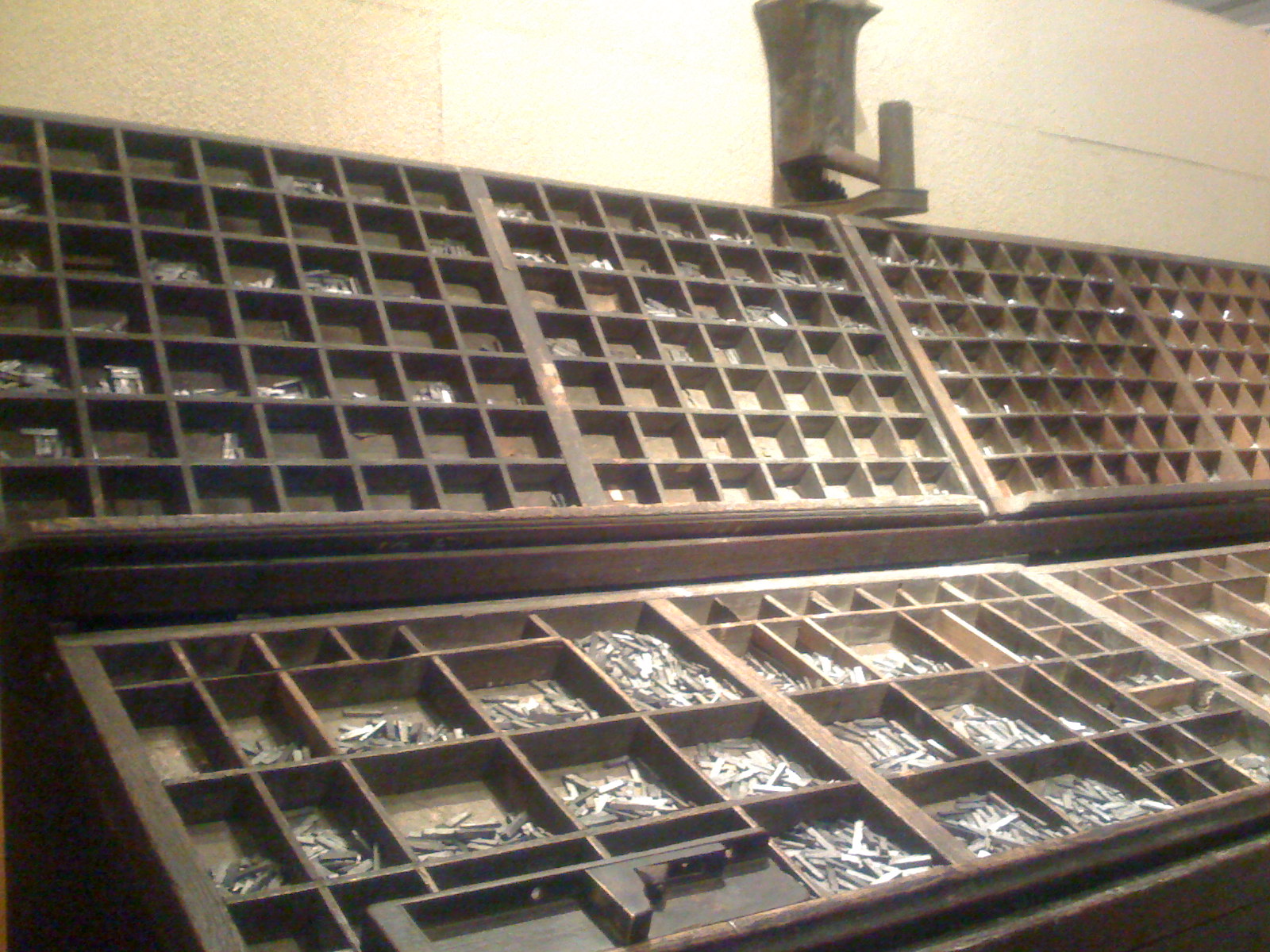 Clearly I haven’t gotten the hang of beating jet lag. I’ve had several drinks and roamed the university campus, and I need to be up in a few hours, but instead of going to bed I’m going to tell you what I did today.

Or at least I’m going to start telling you. I’m not sure how far I’ll get. 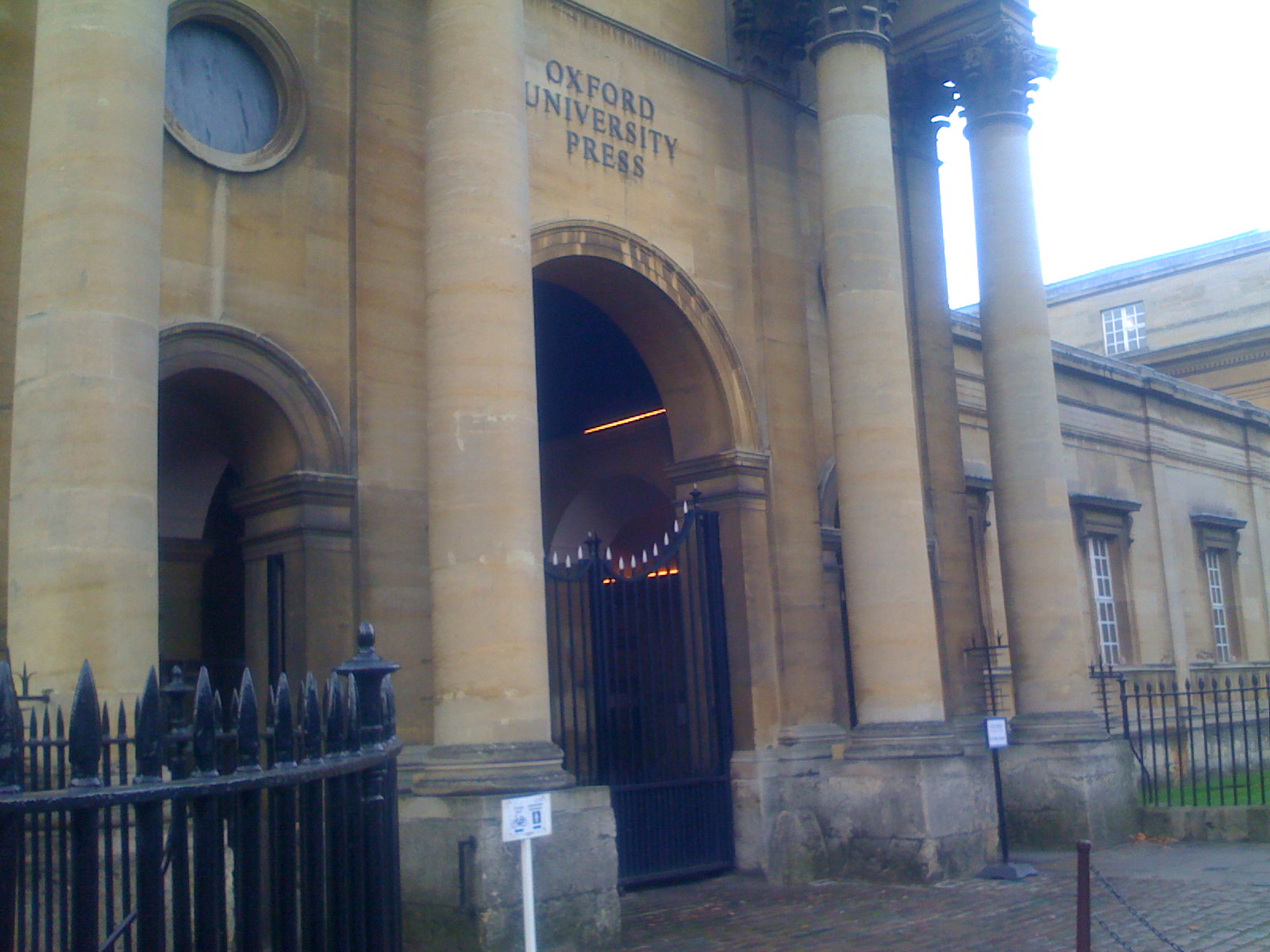 We spent the morning at Oxford University Press, and I hastily snapped this off-kilter photo on the way in.

Given that the OUP’s first book was published in 1478, and that the Oxford English Dictionary itself was an exercise in extremely delayed gratification, I suppose it shouldn’t be a surprise that the press, unlike many publishers, seems to think long-term — and not just in the planning of its publishing endeavors.

In the 1970s, knowing an old tree next to the pond that once cooled the printers’ steam engines would reach the end of its natural life in three or four decades, OUP planted a new tree of the same variety. It now thrives a few yards away from the original, which shows no signs of its impending demise. Both are bursting into the yellows and oranges of fall.

As Archivist Martin Maw led us through the museum for a tour this morning, it struck me anew that the OED likely wouldn’t exist at all had it not been for the foresight and (admittedly sometimes reluctant) patronage of OUP and the British government.

While Oxford University Press provided the initial funding for the project — after Cambridge turned it down — the editor, James Murray, a self-taught Scot of modest means, exhausted those funds and was soon financing things out of his own pocket. Maw and Associate Editor Peter Gilliver (Ring of Words) suggest that Murray delayed asking for more money because he feared that the dictionary would be scrapped altogether. But the the first volume (A-ANT) finally appeared, and then the British government stepped in.

At the top of this post is a photo of original OUP printing pins, each of which had to be set into place manually. Below that are images of an early OED printing press, and of 5,000 original OED contribution slips, sorted and boxed. 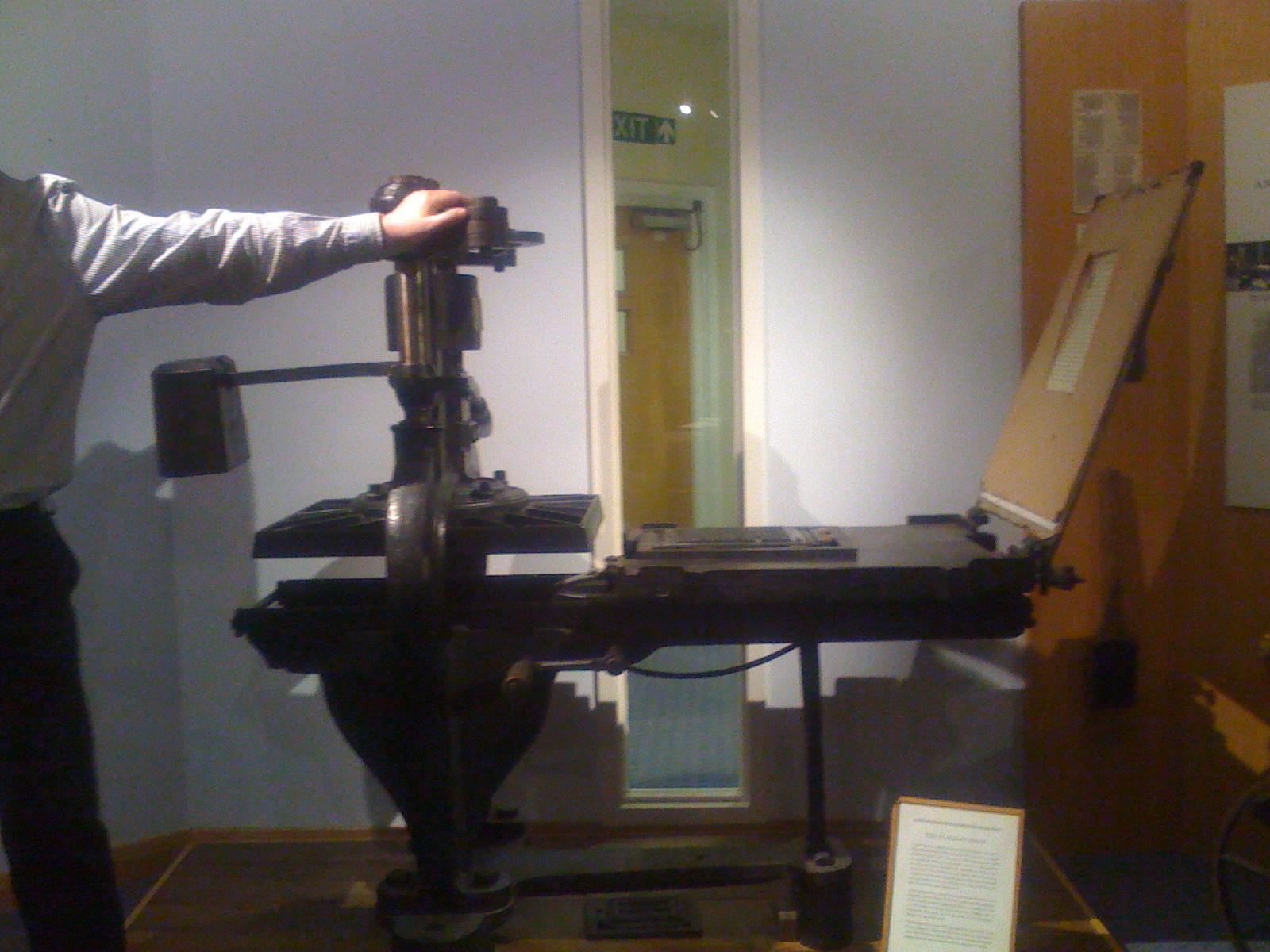 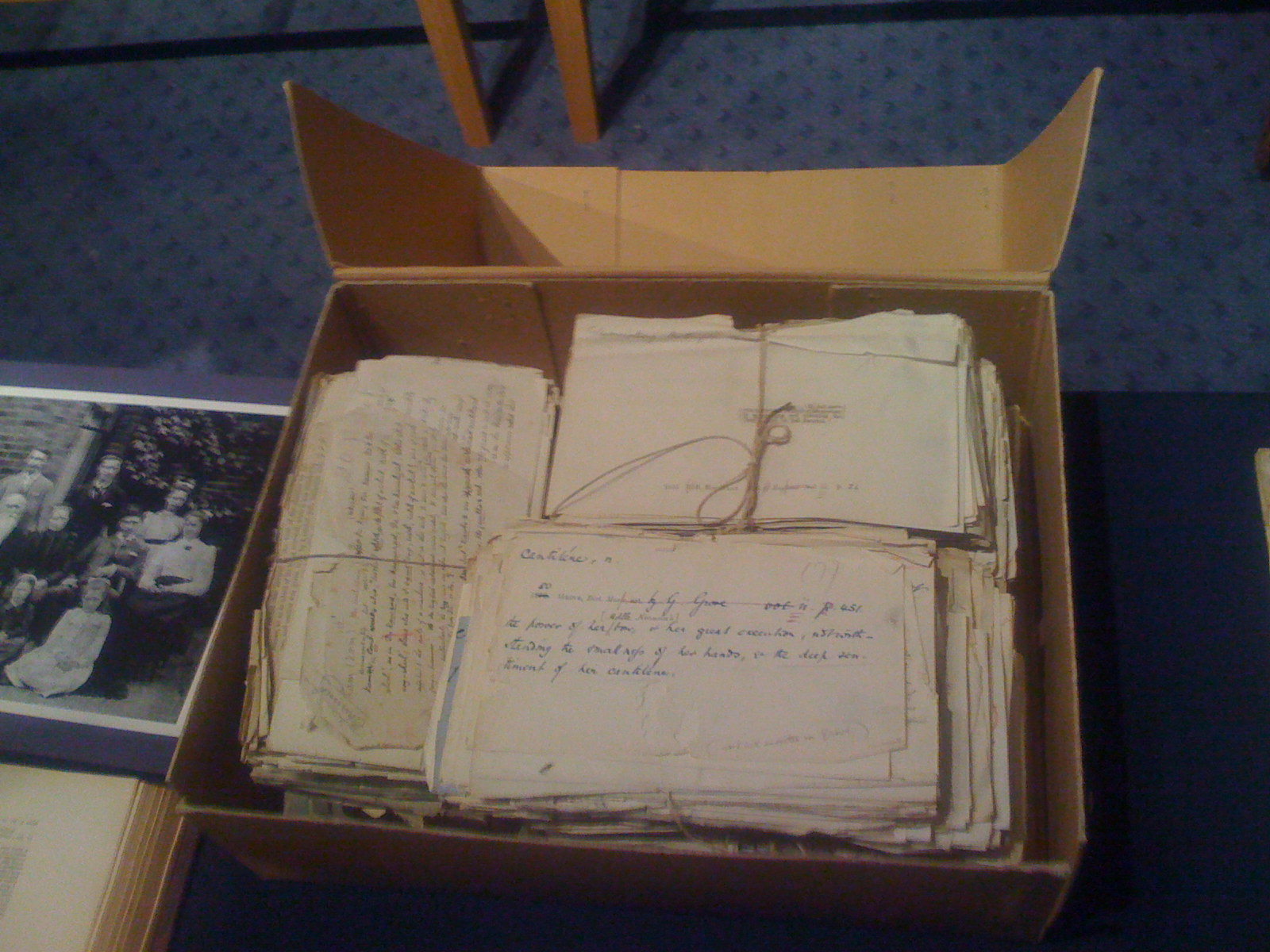 Even now the OED requires funding it will never earn back. “At no period in its history has the Oxford English Dictionary been profitable commercially for Oxford University Press,” according to the OED website.

So far cuts of OUP dictionary staff in the States and Canada haven’t seemed to affect the OED, at least not directly. Let’s hope the changing market conditions — free online dictionaries probably chief among them — cited in newspapers as reasons for the downsizing don’t lead to whittling away at the crown jewel.

Publisher Casper Grathwohl explained that, the OED aside, many of the OUP dictionaries — the New Oxford American Dictionary and Oxford Dictionary of English, for example — are intended to reflect the current state of the language. New words enter; the obsolete depart. Common-sense usages are prioritized. And, with the advent of digitization, OUP dictionaries are seen as “data sets” rather than books.

My understanding from Grathwohl’s and Judy Pearsall’s brief talk is that most, or at least many, OUP dictionaries apart from the OED rely on what’s called the Oxford English Corpus, a “collection of writings … oriented to the twenty-first century” which contains more than two billion words pulled from news sources, blogs, books, and more. It takes large sections from these sources, provides many examples of contextual use in sentences, and allows the same data to be searched and sorted in myriad ways.

Because the corpus is intended to represent the language as it stands at any given time, it is constantly shifting. Yet this of-the-moment data relies to a large degree — some 25% or 35%, if memory serves — on fiction. As Atlantic literary editor Benjamin Schwartz observed in our Q&A session, it’s interesting and somewhat surprising, given the prominence (or the lack thereof) of fiction in the culture at large, that fiction receives so much weight in the corpus, and thus in the OUP dictionaries.

Pearsall explained the reasoning: Fiction contains many important English words which we think of as common but which are, in fact, very rarely used in news articles or casual writing or speech. Moreover, she argued, fiction tends to reflect actual usage, at least insofar as most authors try to replicate actual speech in dialogue. Unfortunately, there was no time to inquire about historical or experimental fiction. (Poetry, because it does not represent actual use of the language, is excluded from the corpus altogether. I didn’t think to ask about songs.)

Mark Liberman of Language Log and Barbara Wallraff (now blogging for The Atlantic), among many others, are also here, and I look forward to hearing everyone’s thoughts about the preponderance of fiction in the corpus. 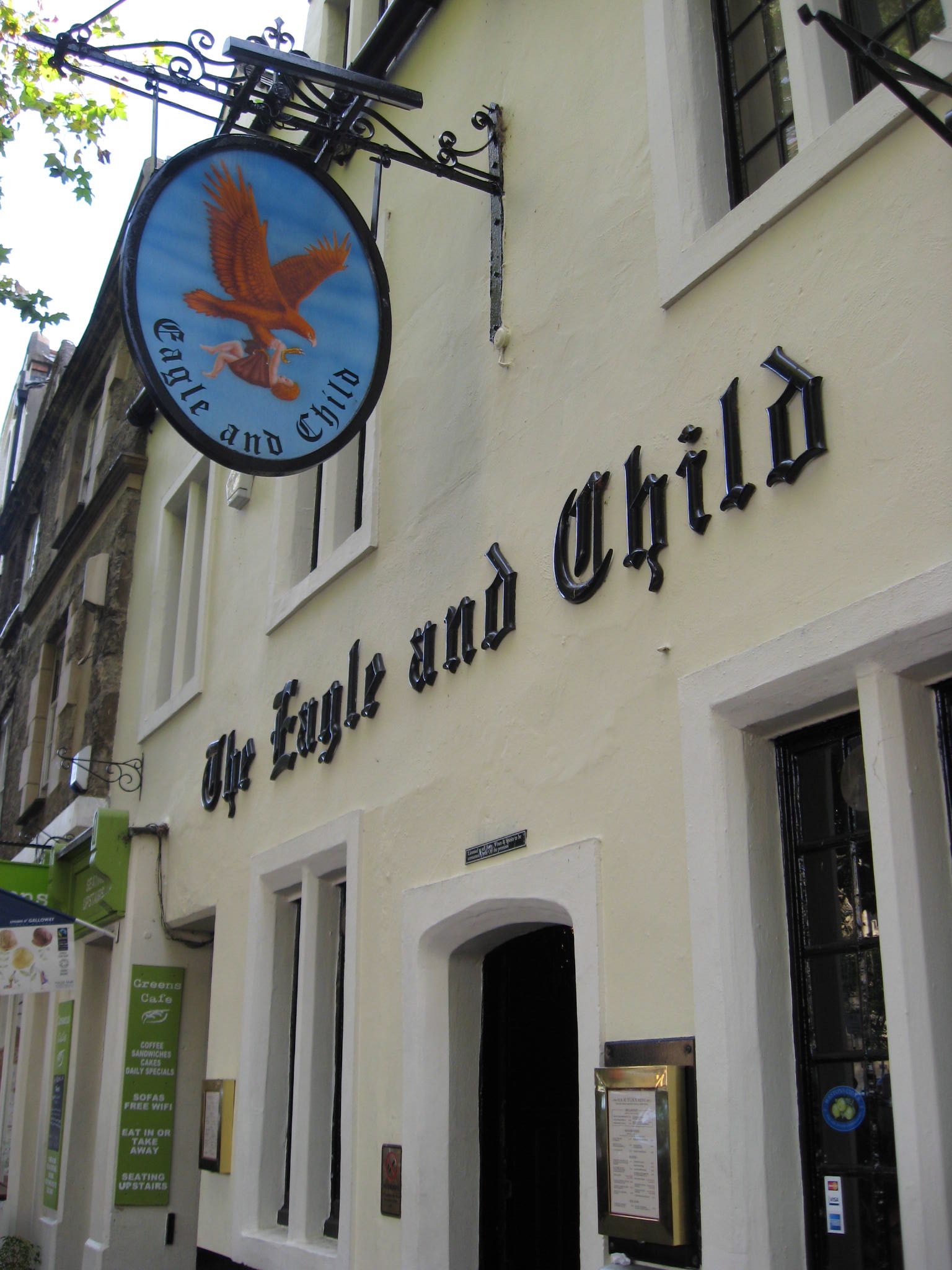 For lunch we went to The Eagle and Child (locally sometimes called “The Fowl and the Fetus,” according to Max). That’s the pub where OED contributors C.S. Lewis and J.R.R. Tolkien met for many years with the other Inklings on Fridays.

There the witty and very tired Simon Winchester ordered a beer but not lunch. (In hindsight, I envied his moderation. The food tasted good, but it took hours before I felt free of the boulder of fish and chips, sunk in a sea of Guinness, in my stomach.) As the rest of us ate, he praised William Butcher’s University of Nebraska translation of Lighthouse at the End of the World. (I’ve been wanting to read a Verne translation that sidesteps the usual pitfalls.)

He and Barbara Walraff also introduced me to (reminded me of?) Oliver Wendell Holmes’ concise and incredibly timely observation that “Taxes are what we pay for civilized society.” 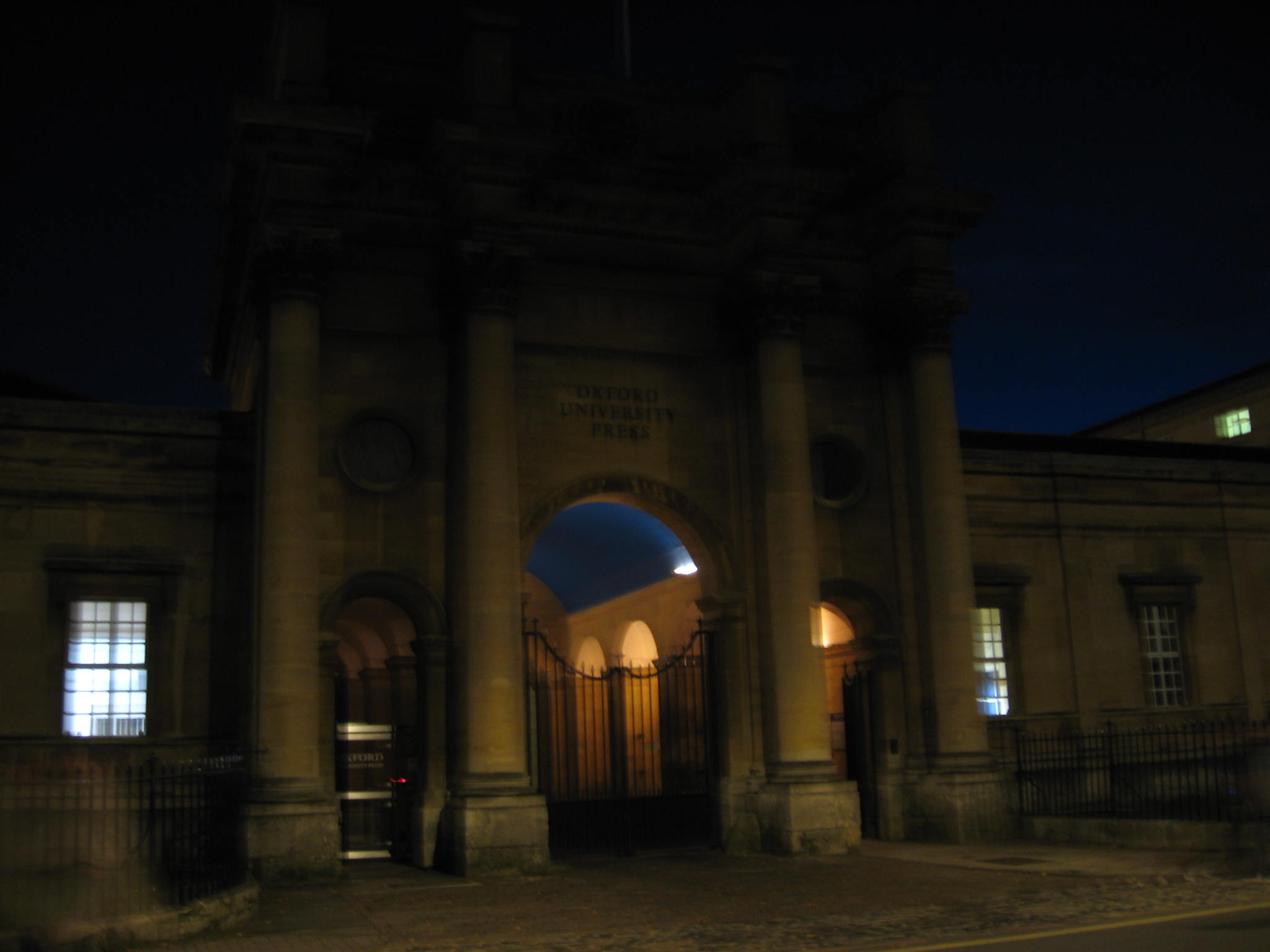 Later, Max arrived after an Aer Lingus layover in Dublin and a bus ride from Heathrow. (His presence here, obviously, is funded by the Maud household’s rainy day jar.)

He and I walked around the city, and eventually wound up in front of the Oxford University Press building. (You can tell whenever Max is the one taking the photos, because the columns, cornices, railings, and domes aren’t cut off at random, vaguely disturbing angles.) 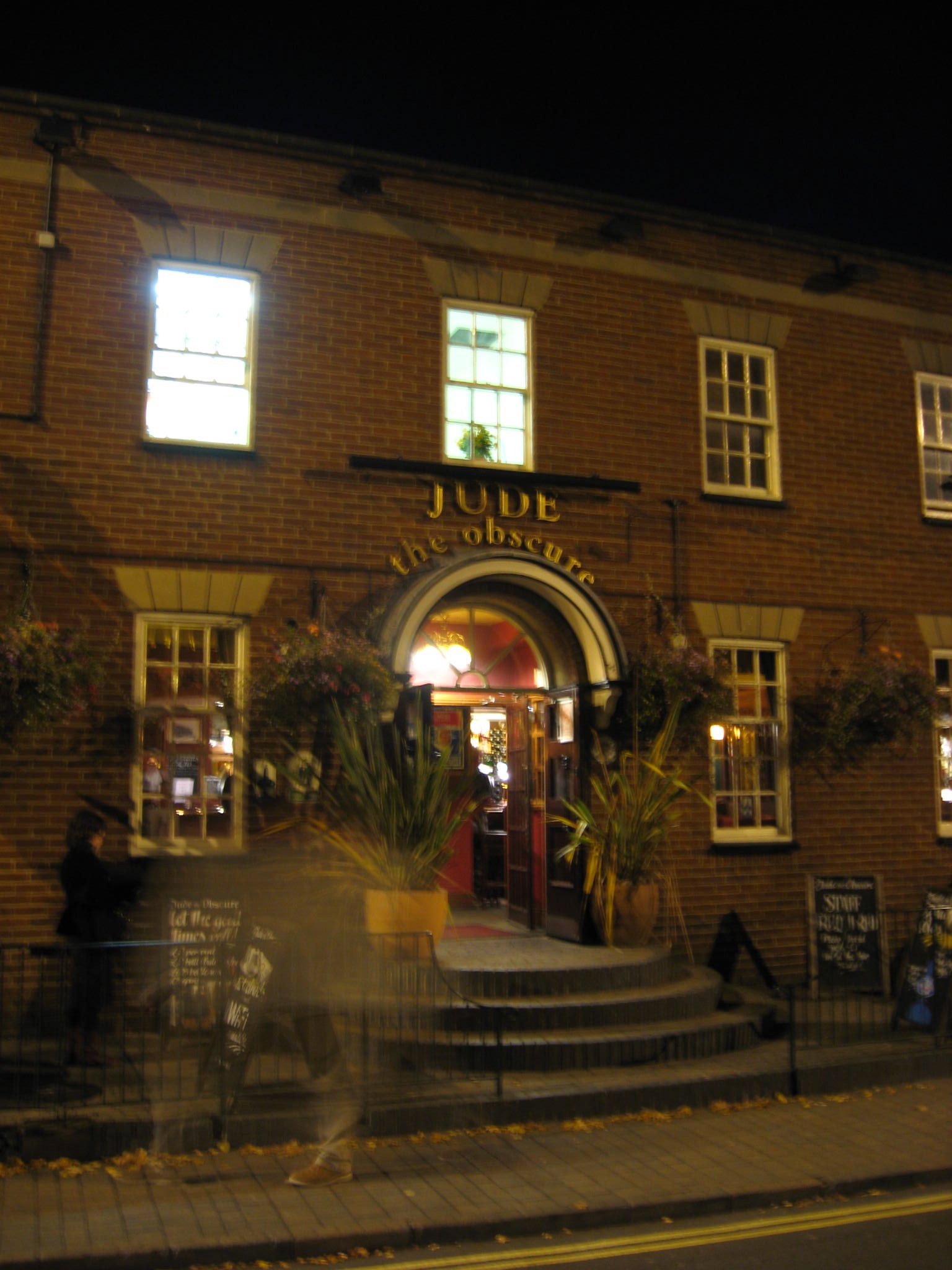 Then we went to an excellent pub called Jude the Obscure — the closest I’ll get in Oxford to paying homage to my beloved Thomas Hardy — where they actually had Jameson’s and other whiskeys on tap.

Am I just frequenting the wrong bars, or has this innovation so far failed to reach America? And if so, why?

Steering clear of the brown liquor, I soon became sleepy, and turned to my glowing version of the nicorette patch. 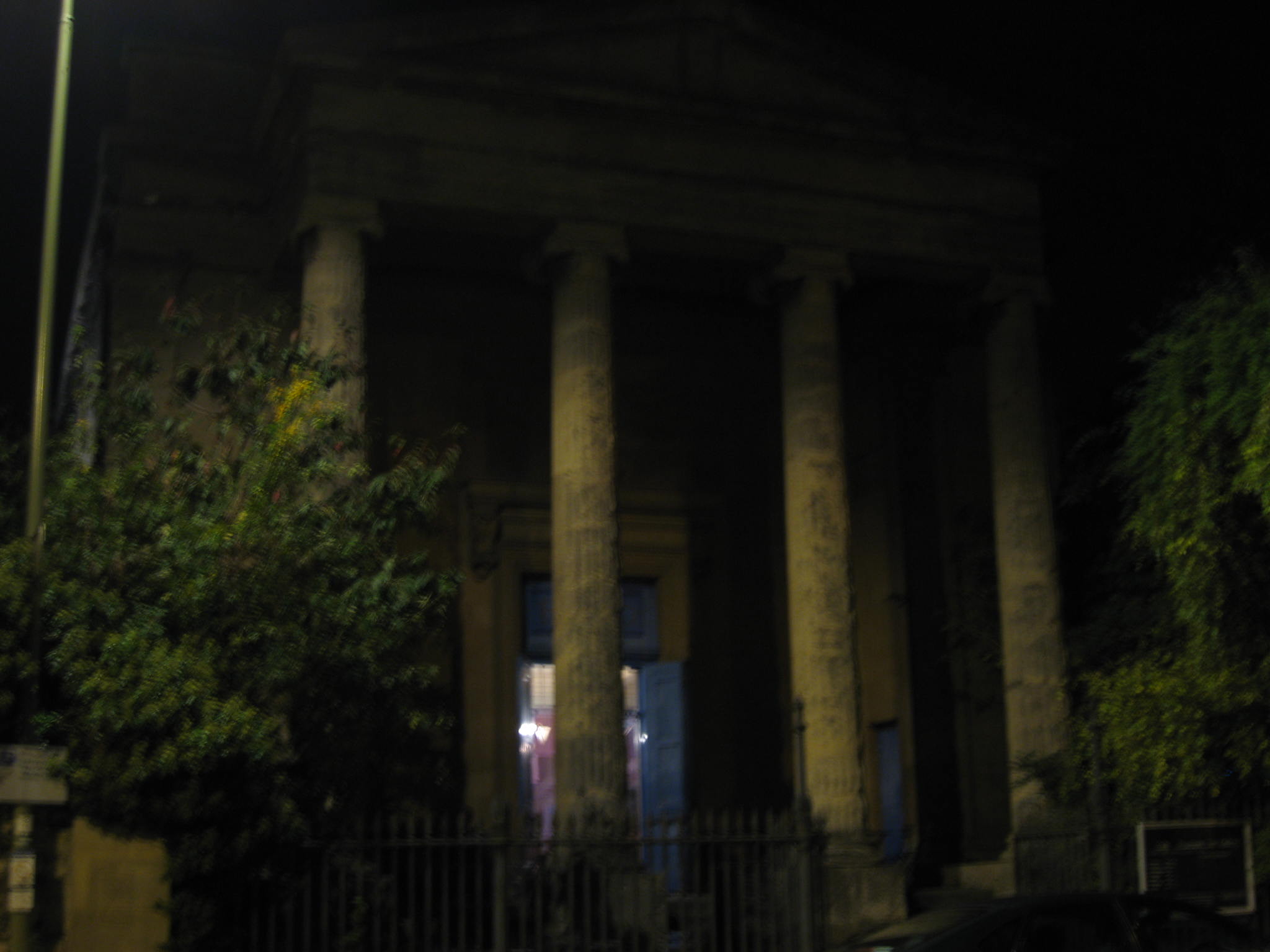 Afterward, we landed at Frevd, a bar/restaurant/gallery with an overworked but cheery server who smiled as he delivered my tomato soup, which tasted a lot like Spaghetti-O’s.

In the lavatory, a sign advised patrons, “Drinking water is freely available at the bar.”

Again: Why don’t we have this in New York? 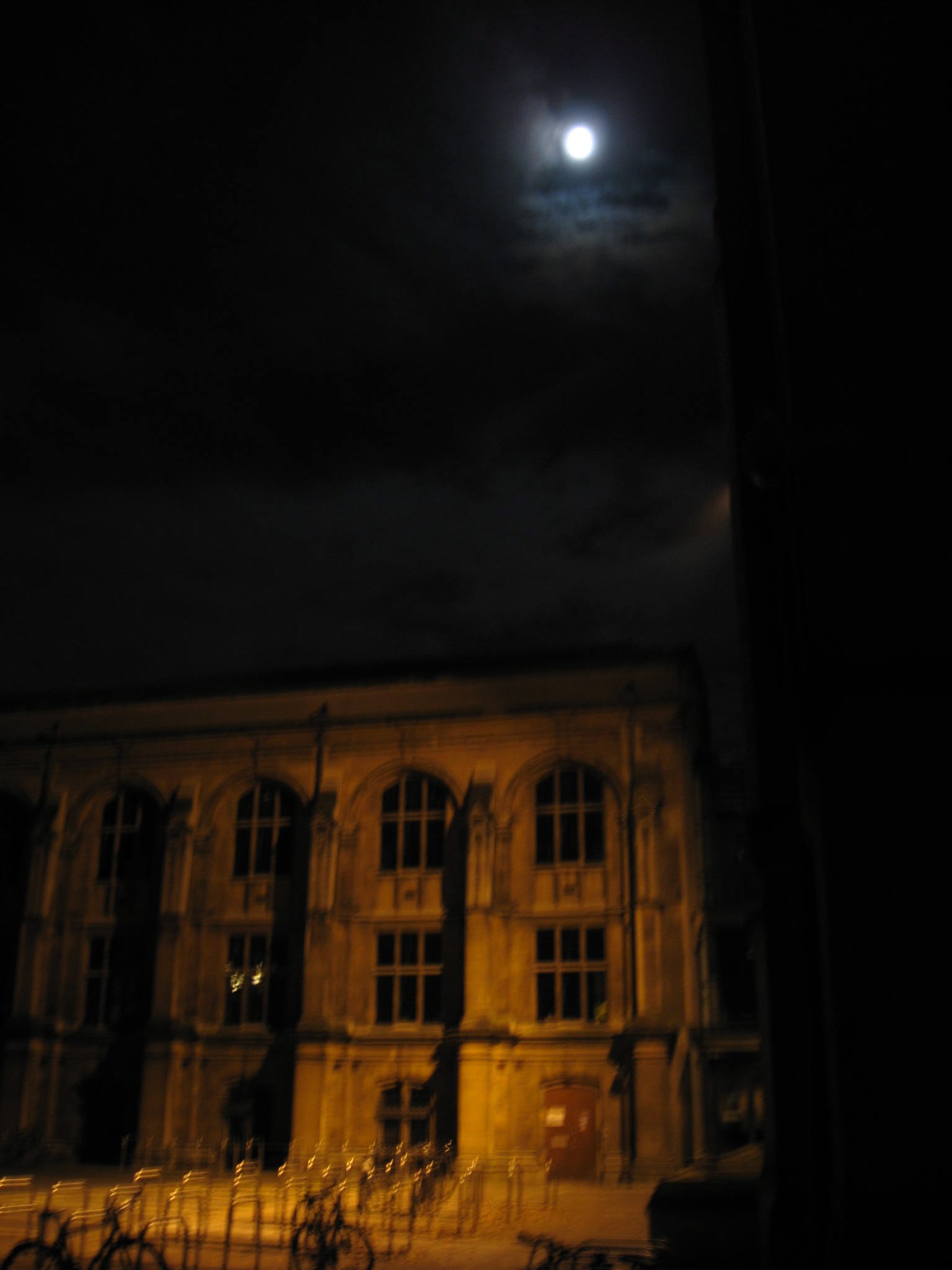 Then we went for a walk on campus. It’s not that cold tonight, but the damp cuts right through your clothes. Still, the views are breathtaking.