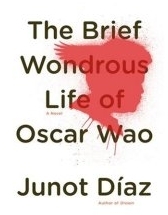 When I first met Dana in person five years ago, we bonded over everything from love of bourbon and Hollywood, Florida dive bars, to the travails of frizzy hair, but it was her reaction to my mention of Junot Díaz’s Drown that told me we were going to be really good friends.

“I know, it’s such a great book,” she said. “And Jesus, when is he going to finish the novel?”

We sighed. New rounds of whiskey were ordered. Cigarettes were lit. Fan letter disclosures were made. (“He seemed a little alarmed that IÃ¢â‚¬â„¢d tracked him down through his Syracuse contact page just to write to him,” Dana said.)

For those of us who worship Díaz — you know who you are — it’s only natural to expect that all the host of heaven will finally descend to sing Hosannahs when The Brief Wondrous Life of Oscar Wao comes out in September.

Until then, I feel like we should all get tattoos so we can recognize each other.

Recently I met Sean McDonald, DÃƒÂ­azÃ¢â‚¬â„¢s editor, for lunch at Do Hwa. I was hoping he’d bring me a copy of the Oscar Wao galley, and he did. Admiring the cover art, fighting the urge to excuse myself and spend the rest of our meal reading in the bathroom, I said that Riverhead might want to spring for security at major metropolitan bookstores the day Oscar comes out, lest people come to blows over the last copy.

Sean laughed and studied his menu. (Our server had stopped by twice to take our order, and we didn’t want to displease her by not being ready a third time.)

“Seriously, though,” I said, “This is a really big fucking deal for some people.”

Before he could respond, the server rematerialized. (Now, I’ve been to Do Hwa probably thirty times, and this woman has covered my table more than half of them, and while she has always been polite and attentive and impeccably coiffed, I’ve never seen her crack a smile or display interest in anything other than whether you might like dessert, or another drink.)

She flipped open her pad, readied her pen. “What would –?” she began, but the book next to me on the table caught her eye. “Oh!” she said. “Is that his novel? Have you read it yet? Where’d you get it? Drown is one of my favorites!”

So now you know where to go when you want to talk about Oscar Wao on September 7, after you’ve stayed up all night reading it. (And if you’re not into Korean food, there’s always Blue Ribbon Sushi. While I was writing this post, Sean emailed to say that he went to lunch there today, intending to give someone a copy of the book, and the hostess excitedly grabbed the galley off the table.)

The book exceeded my expectations in almost every particular. For now, here’s one delicious footnote:

For those of you who missed your mandatory two seconds of Dominican history: Trujillo, one of the twentieth century’s most infamous dictators, ruled the Dominican Republic between 1930 and 1961 with an implacable ruthless brutality. A portly, sadistic, pig-eyed mulatto who bleached his skin, wore platform shoes, and had a fondness for Napoleon-era haberdashery Trujillo (also known as El Jefe, the Failed Cattle Thief, and Fuckface) came to control nearly every aspect of the DR’s political, cultural, social, and economic life through a potent (and familiar) mixture of violence, intimidation, massacre, rape, cooption, and terror; treated the country like it was a plantation and he was the master. At first glance your typical Latin American caudillo, but his power was terminal in ways that few historians or writers have ever truly captured or, I would argue, imagined. He was our Sauron, our Arawn, our Darkseid, our Once and Future Dictator, a peronaje so outlandish, so perverse, so dreadful that not even a sci-fi writer could have made his ass up. Famous for changing ALL THE NAMES of ALL THE LANDMARKS in the Dominican Republic to honor himself (Pico Duarte became PicoTrujillo, and Santo Domingo de Guzmán, the first and oldest city in the New World, became Ciudad Trujillo); for making ill monopolies out of every slice of the national patrimony (which quickly made him one of the wealthiest men on the planet); for building one of the largest militaries in the hemisphere (dude had bomber wings, for fuck’s sake); for fucking every hot girl in sight, even the wives of his subordinates, thousands upon thousands upon thousands of women; for expecting, no insisting on absolute veneration from his pueblo (tellingly, the national slogan was “Dios y Trujillo,” and if, at any public gathering, you forgot to toast Trujillo’s health you could find yourself in a world of hurt); for running the country like it was a Marine boot camp (trusted generals would get themselves kicked out of a job because Trujillo found dirt in one of their barracks); for stripping friends and allies of their positions and properties for no reason at all (just imagine what he did to his enemies) and for his almost supernatural abilities (dude was the original Witchking of Angmar).

Outstanding accomplishments include: the 1937 genocide against the Haitian and Haitian-Dominican community; one of the longest, most damaging U.S.-backed dictatorships in the Western Hemisphere (and if we Latin types are skillfull at anything it’s tolerating U.S.-backed dictators, so you know this was a hard-earned victory, the chilenos and argentinos are still complaining); the creation of the first modern kleptocracy (Trujillo was Mobufu before Mobutu was Mobutu); the systematic bribing of American senators; and, last but not least, the forging of the Dominican peoples into a modern state (did what his Marine trainers, during the Occupation, were unable to do).