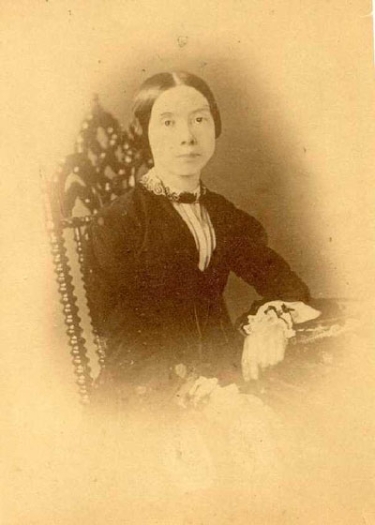 Back in 2000 The New Yorker published a possible photograph of Emily Dickinson that scholar Philip Gura purchased on Ebay for an astonishingly low sum. Until the image surfaced, and still, the only authenticated portrait of the poet was the pensive and haunting Amherst College daguerreotype we all know.

I remember seeing the “Talk of the Town” piece on Gura’s find — and being struck by how closely Dickinson (if it was, indeed, Dickinson) resembled my Mississippi grandmother — but I never heard the follow-up.

In January 2004, Gura wrote about his efforts to authenticate the photo. The verdict of the forensic anthropologist? Based on centers of eyes, nostrils, corners of mouths, and other factors, he concluded that “‘[T]he fit is quite good’ and thus, to use the language of scientists, the new photo ‘could not be excluded’ from consideration as that of Dickinson.” The sitter could be Dickinson, in other words, but there will probably never be proof.

To see the original Ebay listing, the anthropologist’s verdict, and more, read How I Met and Dated Miss Emily Dickinson: An Adventure on eBay. It might make you look at that original Mark Twain postcard! a little more wistfully.