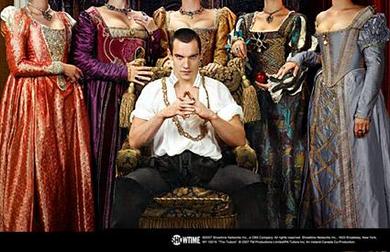 Did Showtime buy up all the train ad slots normally reserved for Poetry in Motion and Dr. Zizmor? No matter which way you turn on the subway these days you’ll catch the deeply unsettling gaze of Jonathan Rhys-Meyers, get an eyeful of cleavage, or both.

Two older gentlemen on the train were trying to figure out which of Henry VIII’s wives outlived him. The woman sitting across from me, trying to read her New Yorker, smirked to herself until it was too much. She stood up and walked towards them. “Catherine Parr.” She said. She was British. “Divorced, beheaded, died, divorced, beheaded, survived. That’s how you remember.” She walked, New Yorker under arm, further down the car.

“Beheaded. So two were beheaded.”

“And two divorced. Which one outlived him?”

“She just told you.”

The man closest to the door adjusted his pinky ring and said “Huh.”

(Anne of Cleves also outlived the king — as his sister.)